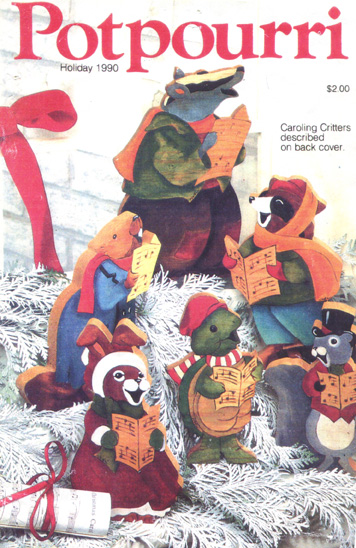 POTPOURI Gift Catalog contacted me and my husband about doing a cover with our wooden carolers. "Of course!" we said (who doesn't want their art on the cover of a major Christmas catalog?) Then the order came- 3000 pieces, to be completed in 3 months! They called to make sure we could complete the order: could we hire more employees if needed? I said I would check the computer. I had no computer (or employees) but assured them that we would get the order done in time, which we did.

We worked every day except Thanksgiving and I swore I'd never paint another caroler again. But then a store in Connecticut called in a panic. Could we please send another set to them ASAP! Apparently, Jim Henson of Muppets fame bought a complete set of 13 and asked the storekeeper to hold 2 weeks until he returned to England. An uninformed clerk then sold them to Ron Howard, the film director, by mistake.

Nadi Spencer
I am an artist, working out of my colorful studio in the foothill town of Three Rivers, California, just below Sequoia National Park. I have worked as a professional artist for over 40 years, in watercolor and acrylic, from very tiny paintings to large murals.